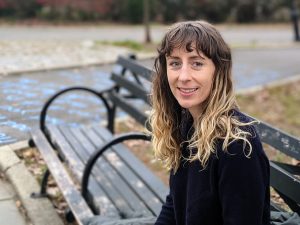 I’m an audio reporter and editor, and for the last six years I’ve taught documentary audio reporting at the NYU School of Journalism.

My narrative podcast Aftereffect from WNYC Studios won a Newswomen’s Club of New York Award, a National Center on Disability Journalism Award, and was a Scripps Howard and Third Coast finalist. My other stories have won 2019 PRNDI and Deadline Club awards for investigative reporting.

My work has been recognized by the Fund for Investigative Journalism, Type Investigations, and published in the New York Times. I’ve been a producer at Radiolab, a reporter at WNYC, a guest reporter at Planet Money, and I’ve helped launch podcasts at Gimlet, BuzzFeed, Slate, and Runner’s World. I’m also a former Rosalynn Carter Mental Health Reporting Fellow.

I live with my family in Brooklyn.